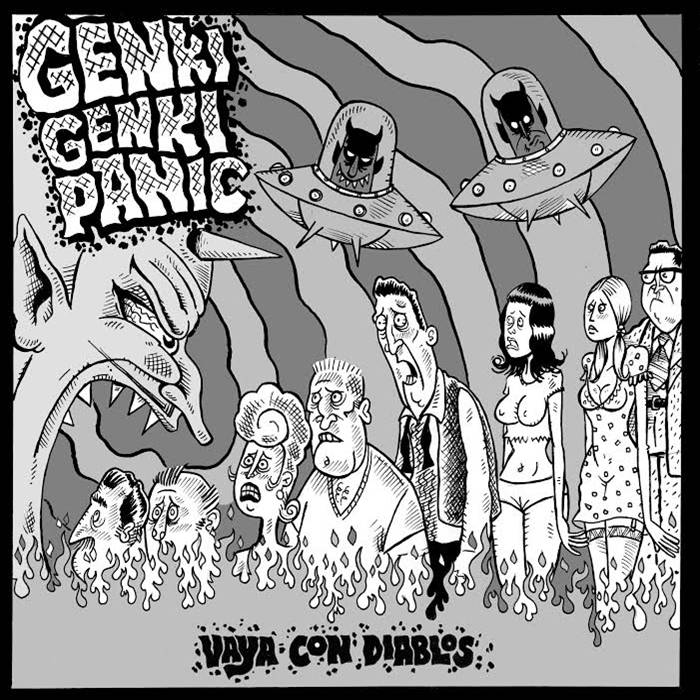 "Vaya Con Diabolos takes the masked ones beyond surf-horror rock...it is a glowing testament to the effort the men in masks have put into refining their already hot sound...intentionally or not, they have broadened their sound in a way that transcends the genre"
"Genki Genki Panic are the best at what they do...melodic and moody and, dammit man, the whole EP is just amazing."

nooga.com/171299/genki-genki-panic-devours-dark-rock-influences-on-vaya-con-diablos/
by Joshua Pickard of Nooga.com

"their cinematic surf punk aesthetic are far more nuanced and composed than you might expect. What starts off as a detour into some skuzzy, punked-up instrumental music becomes an endless examination of influence and execution. Combining punk, surf and instrumental music isn't really as easy as they make it seem, and as a result, people may take for granted the band's capability in composing these intricate and rippling guitar theatrics. On their previous record, "Ghoulie High Harmony," everything felt loose and ready to shake apart. But since then, they've continued to refine their already-considerable musical abilities and warped rock production."

"On their upcoming release, "Vaya Con Diablos," the band perfects their Ventures-meets-The Misfits sound and creates a mishmash of noise and pop punk tendencies that'll leave you questioning all you thought you knew about the band and their music. These songs aren't simply recombinations of assorted inspirations—they're completely rewired examples of how influences should affect a group of musicians. Opening track "Spiderwalk With Me" tackles a shivering rhythm and compounds it with a thrumming percussive line and some ringing guitar riffs that'll stay stuck in your head for days. The subsequent title track casually ventures into the world of lyrical verisimilitude and slow-burn swagger with the help of Bethany Kidd of the River City Hustlers."

". the band neatly and concisely draws everything together in a constantly shifting horror dreamscape. These songs exist in a world of shadow and darkness, with only the barest hint of light occasionally seeping through the cracks. But everything isn't as dreary or morbid as it initially seems. The band only provides enough seriousness to get you hooked, and then everything else is contained within an avant rock history that favors ebullience and excitement as opposed to abject gloom and a murky atmosphere..."

"Vaya Con Diablos" may not have you immediately running to revisit your favorite Link Wray and Black Flag records...but it certainly brings those kind of artists and their impact into clear relief, a frightening musical jolt of electricity thrown from the hands and fingers of the band directly into your brain."

New sounds from Mavi, Ivy Sole & Moderator, plus AJ, the One joins the show, for her latest release