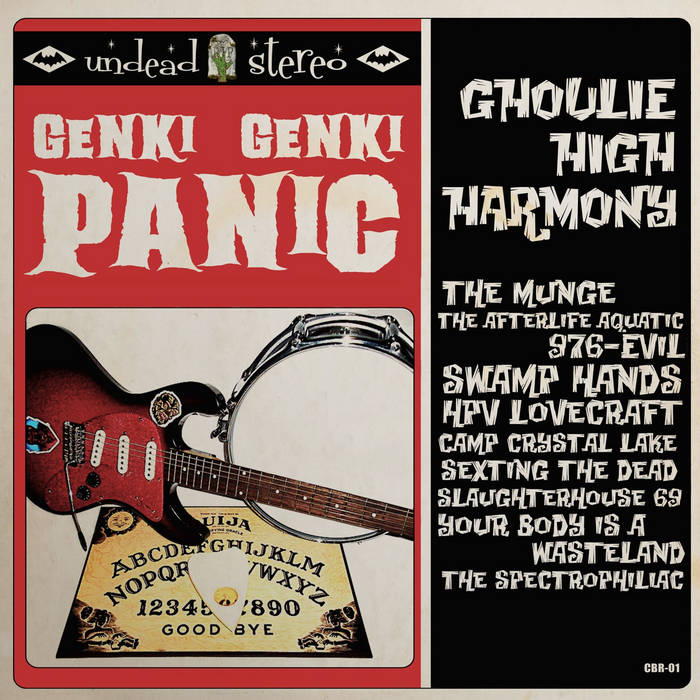 REVIEWS
"Echoing the mondo-weirdo retro vibe of spook n surf greats The Ghastly Ones and Satan's Pilgrims..reverb soaked instrumentals that reference the macabre with cheeky winks and nudges, and competent, inventive instrumentation...exotic, tiki meets belly dance rhythm and Carpenter-esque solos, "Camp Crystal Lake" re-envisions Friday The 13th as a 60's spy thriller directed by Quentin Tarantino circa 1996, while "976-EVIL" thrills more with its uptempo I'm-being-stalked-by-something-terrible urgency than the song's namesake movie ever could. Featuring sly titles plus attitude and atmosphere to spare, Ghoulie High Harmony will bring all the ghost in invisible bikinis down to your horror hangout."
4 out of 5 stars
-Rue Morgue #157

"...if Link Wray was paying tribute to the golden beaches of southern California, Genki Genki Panic is paddling out in the muddy toxic soup of southern New Jersey."
-Shiny Grey Monotone
shinygreymonotone.blogspot.com/2015/04/genki-genki-panic-ghoulie-high-harmony.html

"Genki Genki Panic have seemingly raided the leftovers from every prominent surf band of the past 20 years, combining elements of Los Straitjackets, Thee Ghastly Ones, Daikaiju, and mixing it up with big ol' chunks of early metal and horror movie soundtracks to create a sound that is amazingly fierce for just two people on stage"
-Instro Summit
(www.facebook.com/pages/The-Instro-Summit/106578046087152)


"...perfect for your haunted tiki bar and related witchy goings on...catchy riffs and a driving rhythm propel this forward with God knows what on your heels, but you don’t dare look back."
-Indiemusic.co
indiemusic.co/2015/05/09/its-time-to-genki-genki-panic/


"...a quirky fun album that wades around in the dark and strange, but still occasionally meanders into the sunlight for a breath...uniform in purpose and precise in execution..Reigniting the surfer-rock genre with a classic horror movies twist is something that’s not been done before, and these guys are doing it well."
The Chattanooga Pulse
www.chattanoogapulse.com/music/music-review/horror-meets-surf-rock%2C-all-female-genre-bashing/

"It’s straightforward fun...the drums provide a frenetic beat, the bass thumps and the guitar is sonic amphetamines winding its way through exotic scales....It is minimalist and it is magical...It’s music for road trips on hot days, for being 17 again and shredding on a skateboard, for bouncing and pogoing and moshing in a crowded bar on a sweaty night while pounding cold beers....I could easily imagine these guys opening for GWAR and if one of them doesn’t have a shrine to Vincent Price somewhere in the basement, I’m getting them one for Christmas."
www.chattanoogapulse.com/music/features/the-horror-the-horror-of-surfboards/


"Spiked with rippling surf riffs and a thudding percussive backbone, this record feels simultaneously self-contained and expansive, as if the music were wound tightly around a series of nimble rhythms but loosened with just a quick flick of a guitar pick, sending jagged shards of guitar lines and chest-rattling drums off in all directions. It's easy to get lost in all the quick detours and back alleyways that the band drags you through, but in no time, you're back on the main road, looking in the rearview mirror and wondering what just happened."
nooga.com/170185/the-local-lon-eldridge-and-more/

"...if you like horror surf it's well worth a listen"
Storm Surge Of Reverb
www.stormsurgeofreverb.com/tags/genki-genki-panic

recorded in one six hour session at Sloanzone Audio in Cleveland, TN
www.sloanstewart.com

New sounds from Mavi, Ivy Sole & Moderator, plus AJ, the One joins the show, for her latest release